Ready for the 2022 Superstar  winners?

Before I tell you which furry superstars will be representing 2022, I have to start with another heartfelt thank you for the photo inspiration and stories you emailed to me in your thousands this year.

You never let me down and obviously without you, these calendar and diaries would not have that personal touch that makes it a little bit different from the rest. The entries were once again filled with so much love and your anecdotes made me laugh out loud and and cry in equal measures.

Representing January we have Tadpole, the most loyal companion anyone could ask for and the best homework helper ever! Tadpole would always sit with his head pressed against Will’s head and follow him around like a dog before settling down to work together. I rarely draw humans but had to make an exception with this entry! Owner Nicola Jeffery

Representing February we have Lenny. Len loves the kitchen sink despite having several pet beds and a scratch/play tower… he prefers the sinks, even if there is washing up in there! I am partial to a beautiful interior and it was Lenny’s legs hanging off this bucket chair with his white fur against the lovely patterned cushion that drew me in. Owner Sarah Blake Purvis

Representing March we have Jax, a beautiful gentle yet playful ginger tom who won me over with his enormous look of ” I love this bed” contentment. I try to ensure I get a balance of cat breeds but it would have been so easy this year to make the diary completely ginger from cover to cover. Owner Helen Turney 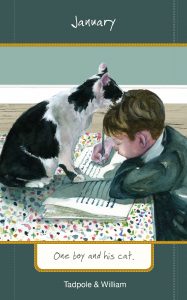 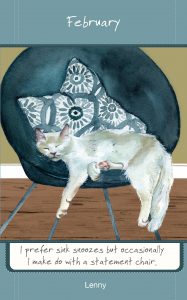 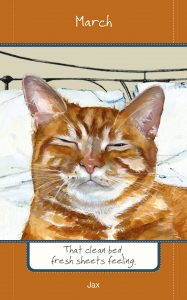 Representing April we have Tinks. The dearest little kitten rescued from a local farm. Diagnosed with Cerebellar Hypoplasia and also profoundly deaf, she has trouble walking and running and as such it would be dangerous to let Tinks roam free. However she is more than happy to enjoy the garden and lap up the princess treatment she receives on a daily basis. Owner David Dexter

Representing May is the rather fabulous Mr Bentley. I do love animal names that begin with a title! Mr Bentley is the much-loved “Manager” of  Helen Nellthrop’s cat hotel! A mature Blue Cross rescue cat, Mr Bentley will meet and greet hotel guests (if he’s feeling sociable!) and loves having his photo taken, especially when he’s doing something he shouldn’t. 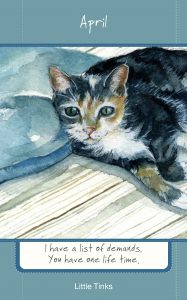 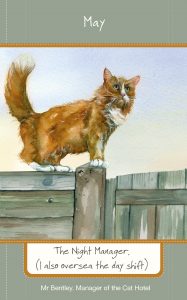 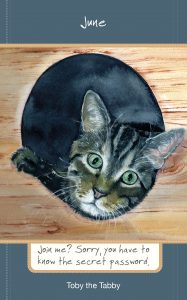 Representing July, the one and only Felix. I received some great photos of cats squeezing themselves into lids and small boxes but I opted for this one because of the way Felix was resting his head on his toy mouse, eeking out delicious comfort where comfort can’t possibly exist! Owner Sara Blunt

Representing August, another stunning ginger tom, the mighty Tim! Tim’s owner, Christine Haydon is obviously brilliant behind the camera because she sent through some amazing shots. It was so hard to choose and like I said, I could easily have used up all my ochre watercolour celebrating the beauty of rich ginger.

Representing September we have Meowser, who knocked on Elizabeth Nicholls’ door and immediately took over their lives, home, garden and hearts! Elizabeth sent me a brilliant email full of Meowser’s antics with photos to match that had me giggling all the way through. She said of Meowser, “She’s a very expressive cat and can, with just the use of her eyes, convey EXACTLY what she is thinking! 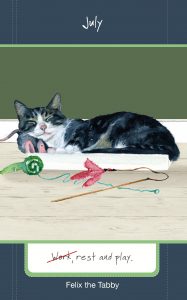 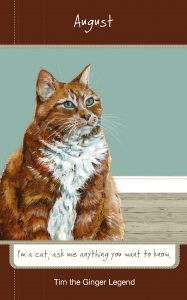 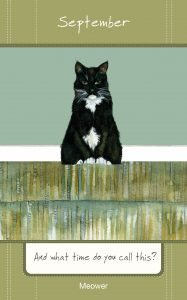 Representing October, young Rommel. Another eye leakage entry. I have previously drawn Melissa Watt’s other cats Phoenix and Merlin and well, I’ll let you read Rommel’s entry first hand and you might understand why Rommel is a winner!

This is Rommel my little shadow cat. He loves his Mummy! We adopted Rommel when I was heart broken for my cat Merlin who was taken from me years too early by kidney disease. Merlin’s brother Phoenix was also grieving and I saw Rommel’s photo on a local cat charity page. He reminded me so much of Merlin that we went to see him. When I met him I burst into tears because of course he wasn’t Merlin. However he crept inside Darren’s jacket and just sat there just staring at me with these kind, all knowing eyes and loving eyes. I fell in love with him for who he was and not who he reminded me of. Merlin was an affectionate cat but Rommel is something else. He follows me everywhere. He doesn’t meow properly so we call him little eek as that is the sound he makes. He curls up on my chest at night to go to sleep. He gave me strength and love at a time I really needed it. I truly believe Merlin sent him to me to help me survive his loss. And the best thing is that Phoenix (Merlin’s adopted brother) who was in a pretty bad way after Merlin died also fell in love with Rommel. We both shared a love for cuddly black cats xxx

Representing November, Lionel the Tabby. When I opened the email containing this photo I laughed out loud, Lionel has such a great expression and the photo is taken very close up. This was my second attempt and to be honest, if the pesky old deadline hadn’t won, I’d have given it one more go because I don’t think I’ve quite done justice to his comedic expression. Owner Sian Griffin

And finally, representing December we have Paddy, the cat third of a dog and rabbit trio who share their home with Vanessa Coombes. I’m a sucker for an usual snoozing position and Paddy was an easy choice for summing up December! 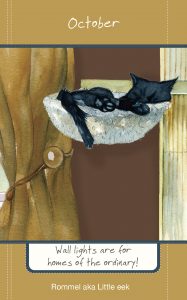 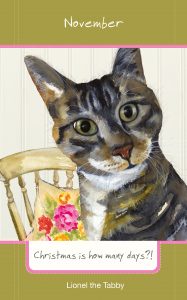 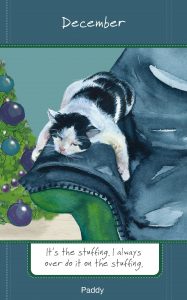 So, those are your cat winners, are you ready for the dogs? Of course you are, let’s go!!!

Representing January is Betsy the Terrier. This photo came to my attention via our Instagram page and she makes me smile every time I look at her. Hopefully she’ll have the same effect on you. Owner Kerianne Atkinson

Representing March is Roxy, furry companion to Patch (This year’s Mr April) Not only did Roxy steel my heart but I just couldn’t draw Patch and not give Roxy her own moment in the spotlight too! Owner Niki Lewington 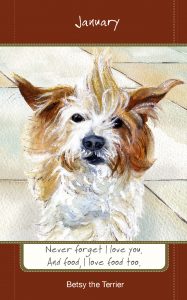 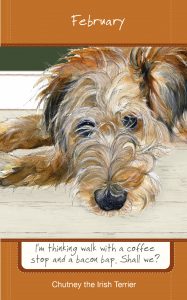 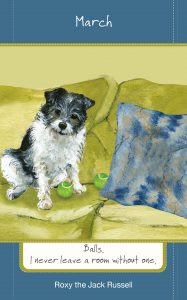 Representing April is Taffy the Sprocker, working his everyday nonchalant fabulousness on a ride in this vintage classic. If the car doesn’t grab your attention then Taffy surely will! Owner Stephen Williams

Representing May is Basil, a short legged, big personality, bushy fox tailed terrier and namesake of Basil Fawlty, because, well, he’s a little bit “runt of the litter” faulty too! There were so many great photos of Basil but I chose this one for the variety and Basil’s love of cheese which is definitely in that picnic basket. Owner Nichola Cradock

Representing June are Gem & Finn the Cocker Spaniels. Family Betts had 13 wonderful years with the bouncy, loopy, funny, faithful, stick loving Finn. Again, there were some great individual photos of Finn but I loved this one of the two of them, on the step, presumably after a fab walk, but not yet ready to relinquish his stick shape prize. 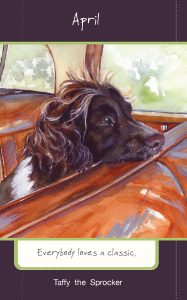 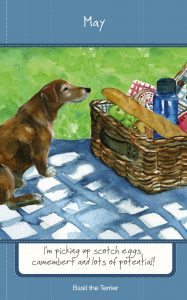 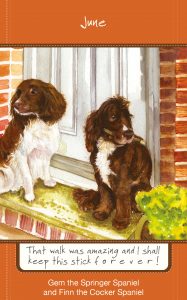 Representing July is the oh so gorgeous Sonny the F1 Labradoodle. I struggle to resist a “dog on the beach” photo but the light in this one was particularly yummy. Owner Margaret Carmody

Representing August we have Maggie & Boris the Cesky Terriers. (Scottish X Sealyham Terriers) I loved this comical duo and again it has very hard to pick from the fab selection of photos their owner Marisha Beth Barclay kindly submitted.

Representing September is Albert the Parsons Terrier X. Albert has already appeared in two of the Little Dog’s greeting card ranges but he doesn’t let fame go to his head. The only payment he requests is Yorkshire tea and the right to drink straight from the cup. Owner Sarah Reynolds Brown 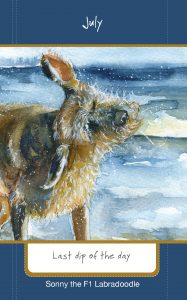 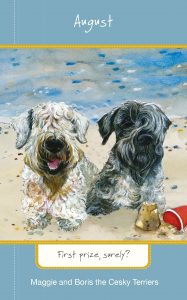 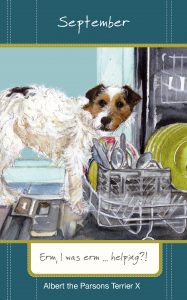 Representing October is Boston the Jack Russell Hungarian Vizsla X. Who, like me wasn’t expecting that combo?! This image just made me happy, (those front paws), and right now finding joy in the little things is a simple way to keep going. Hopefully when you get to this page next year, Boston will bring you the same delight. Owner Nicola Russell

Representing November is Joe the English Setter oozing handsome dignity, even on a windy beach day. His colouring was so lovely to paint, beautiful muzzle markings and soulful expression. I really enjoyed creating this one. Owner Claire Harvey

Representing December is George the German Shepherd Husky X. Apparently, all traces of his 9yr old arthritic bones disappear when it snows and he springs around like a puppy. Such a great face. Owner Rae Ashton. 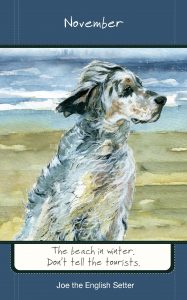 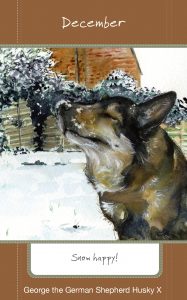 And that good folks is a wrap! Fingers crossed, the diaries will be in stock from late October. Keep ’em peeled for new card designs which may well feature one of your furry loved ones. I just need a couple more hours in a day and someone else to cook for my children!

Once again, thank you for sharing your furry ones with me